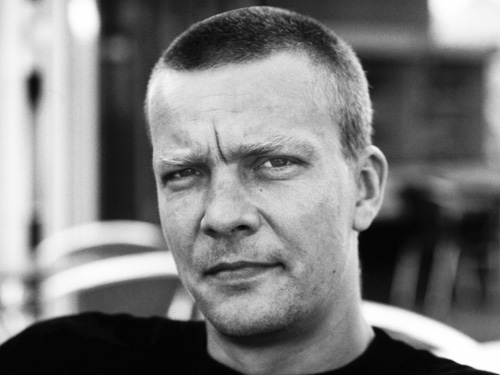 The pain, which all of a sudden pierced my toe was short and stinging. But now it was up to me to endure it and in meantime not to loose contact to his greyblue eyes. Then something completely unexpected happened…
The French art journal „Beaux Arts Magazine“ had assigned me to cover Sigmar Polke on the occasion of his great Exhibition in the Carré d’Art, Musée d’Art Contemporain, Nîmes. There was not much preparation necessary as Sigmar Polke was one of the artists who fascinated me all my life, and whose work I knew very well and still is influencing my own artistic works. No other of the international stars of his generation had so much succeeded in triggering and provoking, in surprising, in showing a great sense of humor and in meantime developing a perfect aesthetic language. So there couldn´t be an assignment more welcome for me. It was summer, there was Nimes, a beautiful museum out of glass and steel and full of light, just built by Norman Foster in a nice relation to a Roman Temple nearby.
The maestro was walking around, always surrounded by an entourage of assistants and press Attachés, his film camera with him all day, he was supervising the hanging of his works. I was photographing with my plate camera picture after picture, he switched the works, I photographed again, and the other way round. The only thing: I couldn´t meet him, couldn´t make pictures of him – which was the important part of my assignment. Every try to approach him was banned. Maybe later, maybe not at all, who are you, what is your point, just take pictures of the exhibition….
I talked to the director. He was nervous and excited. He really wanted that feature story about his museum to be covered in the most important art magazine of the country. But obviously he couldn´t help me approaching Polke. The next day passed by as the day before, besides Polke seemed to be even more unaccessible. I felt frustration and anger piling up. What an arrogant dude. And let the director know, that in case I had no access to the artist till the end of next day I would leave and provide no pictures at all. And decided to make a last direct try.
I was lurking behind a corner and getting more aggressive every minute. Then, after a while, the entourage was approaching and Polke in front. I darted out of my hiding place, extended my hand, and blocked his way. He was large and strong and had a belly, and he looked at me through his colored glasses kind of top-down, although he was smaller. But his handshake was spongy. That was my chance: I gripped his hand and I pressed as strong as I could. When I was a young man I sometimes earned money by arm-wrestling against construction workers. He endured my pressing and kept a straight face. Then all of a sudden I felt that pain in my toe. I needn´t look down: Vehement and precisely he stepped fully on purpose with his heel on my foot. He smiled, then laughed, first restrained then open and loud. „What do you want, you want me to strip for you“, were his first words to me. „That would be nice“ I answered.
He stepped in front of one of those glass walls, who opened up towards the beautiful city with that nice Italian flair and started to get rid of his short-sleeved shirt, then his undershirt, and started posing with naked upper body. I started photographing, aware, that the backlight would spoil every single picture. The people in the room couldn´t trust their eyes, they didn´t notice, what had happened between us.
From that moment I could accompany him all day. Made hundreds of pictures, observational, staged, or something in between. That picture I photographed in black and white with my small Leica and that is the one I love most.
Later we had coffee and talked. He was interested in my work as well – a little. More in my camera equipment. He took it, let me explain made some portraits of me. There are not much portraits of me, and I never showed these ones in public. After all these years my heart is still pounding, when I think back of this wonderful encounter. And I am a little proud that some of the few portraits of myself are made by Sigmar Polke